On the first morning after landing in Japan, I found myself waking up at 6AM (something that is very unnatural for me) with no apparent signs of jet lag nor any fatigue, even though I had arrived at a friend’s apartment from the airport at around 10PM and, after eating out and talking a bit, went to bed around 2-3AM. In any case, my friend was dead tired from the flight and he and his girlfriend slept in while I stood uncomfortably awake in a crowded and muggy room (ah, the joys of free boarding). I decided to take this opportunity to explore the city on my own. Not wanting to disturb Simon, my friend, and his grilfriend Reika-san (a lovely couple might I add), I snuck around the small kotatsu (although the heater not currently in use due to it being springtime) and took the sole key from atop of it and headed out into the world.

This is where I encountered for the first time the quintessential Japanese rural life, the kind that you read about in National Geographic and the likes. Up the road from the apartment were some traditional-style houses with pretty flowering trees growing on the side of the streets where petals fell in great swirls. I passed a old woman who was sweeping the street in front of her house. She looked and me and smiled, saying ohayou gozaimasu! My heart swelled and I replied in concordance.

I should probably say that Sakura is a small, sleepy town only in Japanese standards. In fact, there are 172,263 inhabitants -roughly 10 times the amount of people in my hometown. Then again, compared to 16 million Tokyo dwellers, I guess Sakura really is a small town.

Sakura is where I first encountered Japanese rice fields, clean and convenient trains and the customary hospitality of the people.

Unless otherwise stated, all photography used in this blog is mine and therefore under copyright. Please do not use or re-post these photos elsewhere. Thank you. 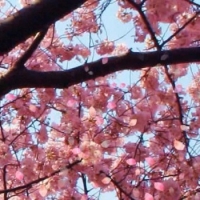 A blog dedicated to the art of tea

The Lazy Beggars' Guide to Cooking in Japan

Eat well, save yen - all with two camp burners and a mini-fridge.

Hey from Japan- or wherever the moving van arrives- Emily Cannell

Come chill on the couch.

And her misadventures in Japan on the JET Program

Essays on politics and culture