I moved to Japan on August 3rd, 2013, as part of the JET Programme Canada, to teach English to elementary and junior high school students in the small, off-radar, town of Hidaka in Saitama prefecture. Since then, I have been living and working in Japan, adapting and learning my way through a new life. Within a year and a half, I have learned and grown so much, it is hard to put in words just how much I appreciate the opportunity that was given to me back in 2012 (at the time of application).

The move was easy. Going to Japan was my life long dream, one which I had been working towards since my days as a high school student in Montreal, Canada. The issue for me was location. I was very well aware when I applied through JET that the odds were stacked against me getting my dream placement. Even so, when I was placed in Hidaka, I was heartbroken. however, saying so, there was still no doubt in my mind that I was going to sign the offered contract and move to Japan. I am much to conscious of other people’s struggles in trying to find a job in Japan to turn around and refuse an opportunity such as the one which was given to me. I packed my bags, against my family’s wishes, got on that plane bound for Narita, and said “goodbye” to Canada without a doubt or a regret.

After the mandatory 3 days of orientation in Tokyo, I was finally able to move to my designated city and start building my life. I was so happy and excited to be there all the previous thoughts of heartbreak flew away instantly. The day I met my supervisor, he came to pick us up (we were three moving in at the same time) in the capital city of Saitama Prefecture. As we got into the car, he said to us “now we have a two-hour drive to get to Hidaka”. During the whole time, he asked us questions about our countries, talked about learning languages and how teaching could be improved, talked about himself and his family, all the while scenes of rice fields and wide stretches of concrete laid out before our eyes. It was as though we had known each other all our lives. My fellow JETs and I shared a “foreigner” bond and our supervisor instantly became our “dad”. At one point, he slowed down slightly and said “we are about to enter Hidaka”, and as we crossed the invisible line between the rest of Japan and our new city, my heart and head screamed in unison “this is home”.

Working as an ALT

When I first got to Hidaka, not much work was to be done because it was summer holidays for the schools. Instead, we worked at the board of education (BOE), doing odd jobs like assembling pamphlets and correcting English on official papers. In our free time we were encouraged to study Japanese so our first month was slowly paced and perfect for bonding with the staff at the BOE, as well as the ALTs already in the city. We were 6 ALTs, only one of which was a second year, our “senpai” at work. Three boys, three girls, two from each country: Canada, Australia and New Zealand. We were explained that they had done this on purpose, to avoid us feeling isolated by being in a foreign country and not having any countrymen nearby. We all felt very lucky at this, especially when we compared notes with friends who were in other cities and prefectures, sometimes completely alone in the middle of nowhere.

When it came time to start working in our schools, I showed up on my first day of work and tried really hard to apply all that had been taught to me by the JET people back in Canada and at Tokyo orientation. That meant, full suit and stockings (despite the 40C mark on the thermometer), using my “sunday” Japanese (i.e. the strict and formal speech) and all around rigid professionalism. Within minutes of being in the staff room, the principal and vice-principal addressed me casually, started joking around about my stiffness, and told me to “relax and chill out”. I thought, “these people are going to be the best bosses”. I was not wrong in my assumptions. I soon became friends with them and the other teachers in my office and looked forward to going to work every morning.

My first assignment: Preparing material to put up on the school’s English board

It quickly became clear to me that, despite of my high enthusiasm and confidence in my abilities, I knew basically nothing of how a school worked from the inside, how Japanese society really worked, and what was truly expected of me. To top things off, my language abilities, which I had previously thought as “quite good”, were soon proven to me as severely lacking. Everything that I had studied up until moving to Japan was but a speck of dust in the universe which is Japanese. Everything; absolutely every little thing, was a new learning opportunity. My coworkers would have a (one-sided) conversation with me and I would absorb every single word that was thrown at me.

One year later, I went from being a N4 level speaker, to an N2. Anyone who has studied Japanese will know, such an immense and rapid progress is nearly impossible to achieve in a classroom. This is something that comes from living and experiencing the country.

I could go on and on about my experiences so far but I’ll leave that for other posts. Since living in Japan, I’ve travelled, I’ve improved my language skills, I’ve been to concerts, met people from around the world, made lasting friendships, fell in love, been heartbroken, loved my job, loved my students, and much, much more. Through all of this, one thing remained constant; my deep love of Japan and willingness to continuously evolve, adapt and grow.

I am grateful to the JET Programme for allowing me to live this wonderful life, to my family and friends back home who supported and encouraged my application, to my coworkers in Japan who always try to help and alleviate the difficulties of living abroad, and my JET friends, a wonderful international community of overwhelming support and love.

Here’s to another wonderful year ahead! 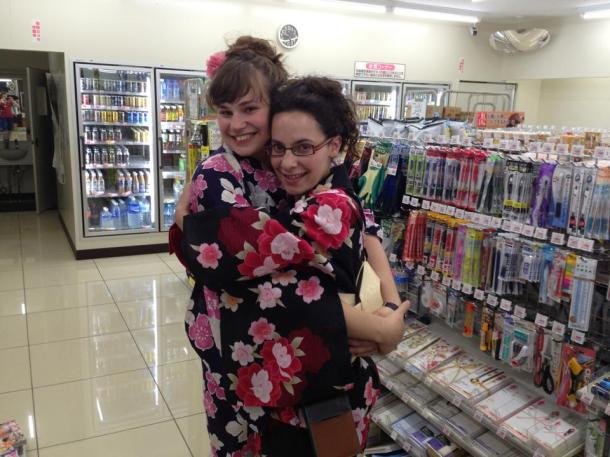 Best friends, thanks to JET 🙂

Unless otherwise stated, all photography used in this blog is mine and therefore under copyright. Please do not use or re-post these photos elsewhere. Thank you.

A blog dedicated to the art of tea

The Lazy Beggars' Guide to Cooking in Japan

Eat well, save yen - all with two camp burners and a mini-fridge.

Hey from Japan- or wherever the moving van arrives- Emily Cannell

Come chill on the couch.

And her misadventures in Japan on the JET Program

Essays on politics and culture